Some words aren’t ‘real’ words. But if they look, sound, and behave like real words, they may gradually infiltrate the language and before you know it everyone just assumes they were real words all along.

And who is to say what is a real word and what is not? Not the dictionary, whose role is to describe the language, not to prescribe what should or should not be used. No, it is users of the language who decide – which means you!

So is trepidatious a real word? It is not in the Oxford Advanced Learner’s Dictionary, but should it be? I will present its case and leave it to you to decide.

Actually, my case is getting off to a very bad start, as my computer program adds a red wavy line underneath the word trepidatious every time I type it. Clearly my word-processing software does not approve. However, I will ignore that and press on. 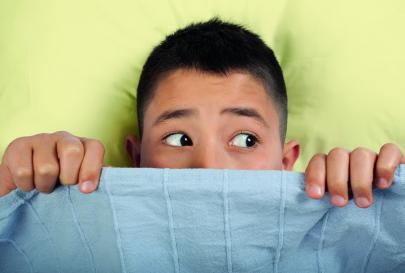 A common and accepted way to create new words is through derivation, or adding prefixes or suffixes to existing words to make new ones. Thus the verb entertain becomes the noun entertainment with the addition of the noun suffix -ment. So, we should start with the noun trepidation, which describes a fear that something bad might happen, for example:

He knocked on the door with some trepidation.

She set off up the mountain with fear and trepidation.

This noun is a fine alternative to the more mundane fear or the less formal nervousness, and no one will bat an eyelid if you use it, in fact probably the reverse – people will be impressed by your wide range of vocabulary. Talking of which, how many other English words for fear do you know? We’ve got lots! I’ve listed 15 synonyms or near-synonyms of fear at the bottom. Give yourself a point for each noun you can think of and see if you can score over ten points!

Most of our ‘fear’ nouns have adjectives to go with them: we have apprehension/apprehensive, nerves/nervous, worry/worried, fear/fearful, phobia/phobic just for starters. So why can’t we have an adjective trepidatious for our noun trepidation?

The formation of the adjective is grammatically sound. We turn other nouns ending in -ation into adjectives ending in -atious, for example flirtation/flirtatious, ostentation/ostentatious, vexation/vexatious. Trepidatious follows the pattern and allows us to create sentences such as:

I was feeling trepidatious as I approached the door.

She was trepidatious but also excited about future challenges.

Such sentences are used in real life. Just the other day I heard the following on a radio podcast from a film critic who was about to watch a much-hyped new movie:

I went into this slightly trepidatious.

There are almost 200 examples of trepidatious being used in real life in our newest corpus (= our collection of written and spoken texts as of February 2018), which is admittedly not a very large number. For comparison, there are 8,000 instances of the noun trepidation and 10,000 of the adjective apprehensive, so there is a long way to go before it becomes common usage. But there were no examples at all in our older corpus (up to 2014), so usage is certainly growing. The Oxford English Dictionary cites examples going back as far as 1904, so perhaps the word fell out of common usage and is now making a comeback.

My final point in favour of trepidatious is that it is easily understood. If you know the word trepidation, then you will not be confused if you come across the word trepidatious, even if you’ve never heard it before. This may be why the word is creeping in under the radar, as its use does not cause a problem with communication.

As we have already seen, we’ve already got lots of synonyms for afraid. The closest in meaning to trepidatious is probably apprehensive, so you may feel that that is perfectly adequate and trepidatious is just surplus to requirements. Or do you think we should welcome new ones, in the spirit of ‘the more the merrier’?

Jennifer Bradbery has worked on many dictionaries and other reference materials for learners of English, including the Oxford Learner’s Thesaurus, a dictionary of synonyms.